When we first got the go ahead with approval from our landlords that we could get chickens I got super excited and started researching what was the best way to introduce them to the family.

My big concern was our dog, Lucy. How would she react with the chickens – would she become a chicken killer, would we be able to let them free range or would they (or Lucy) have to be locked up. Lucy is a beagle, and it’s fair to say that chasing small animals is somewhat of an instinct, and chasing becomes a fun game which could end up inadvertently killing chickens. We introduced our cat as a kitten to her, and after an initial scuffle with fur after thinking the cat was a squeaky toy with murder buttons, she was fine, now they have a somewhat odd relationship, they snuggle in winter but hate each other in the summer.

In order for Lucy to understand that the chickens were part of the family, we decided to go the day old route. That way it would give her a chance to get used to the idea of having feathered friends sharing her space.

I had no idea about how to care for day old chicks, but I did know that the chance of winning the rooster lottery was 50/50. Living in the city, you’re not allowed to have roosters due to the noise (wish that was the same about the neighbour who always fires up his noisy power tools just when I get the baby to sleep). So essentially you need to know what you’re going to do if you do perhaps end up with a rooster. I found a place in Brisbane that you purchase all your day old chicks from sexed, with a guarantee, if you win the rooster lottery you can get a credit for the amount you paid and they offer a rooster ‘removal’ service for around the same price. They also supplied a brood box kit, we basically hired the box and it came with everything we needed – which made the whole process a hell of a lot easier. Whilst you could list your rooster on places like gumtree free to good home, I had a moral issue with this as it is giving fuel to illegal cock fighting.

We did win the rooster lottery, but instead of returning the rooster, who we had named Butter, he went to live on my parents farm. He grew into a stunning rooster.

Since growing our first lot of day olds, we attempted surrogacy with our broody hen only for it to fail and having to raise them from about 2 weeks old. We are so glad that we went through the first process of raising our day olds so we knew what we needed to raise them, and to help you get started here is what you’ll need.

A brood box is essentially a box that you keep the chicks in. The first time around we hired a fancy brood box which had inbuilt light. It had a glass display on one side and was a pain in the butt to keep clean. 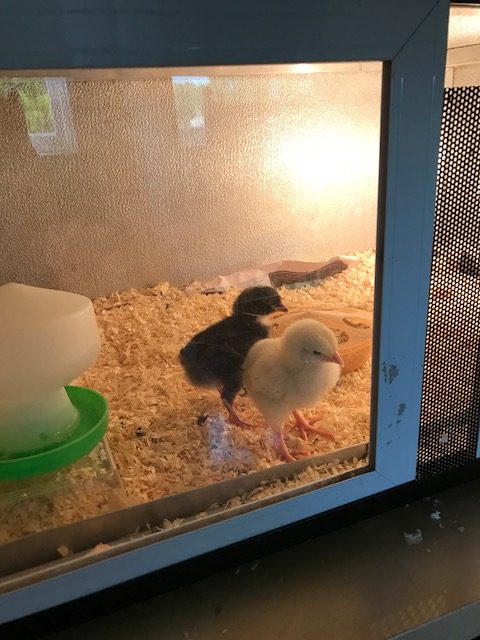 For our second time around, we used a plastic tub and put some aviary wire over the top to stop them jumping out. This was great as we could just hose out the plastic tub to keep it clean.

The first time around, we had the brood box inside our spare room mainly because we were worried about cats eating them, but oh my god they stink. So the second time around they were demoted to under the house. Just keep them somewhere where they are away from rain and drafts.

In the kit we received from the chicken place, we were given wood chips. I found these hard to clean and stunk up the place. The second time around we used straw, it was much easier to clean up and allowed their poop to drop to the bottom and they wouldn’t get pooey feet. It is super important that you keep their home clean to avoid them picking up any nasty diseases. A sick day old chick is pretty much a goner.

When first born, chicks are little fluff balls with no feathers for protection and spend a lot of time sitting under the warmth of their mothers. Until they get this protection you really need to keep them warm. We used a desk lamp with a 100w incandescent light globe. If you live in a cooler climate you may want to check out something a little more powerful. Place your light in one corner of your brood box so the chicks can move away if they feel like it’s too warm.

The food we used was a chick starter and you can get this from most produce stores (if you’re inner city just look in the outer suburbs where there are more acreage lots and you should be able to find a produce store, most pet shops wont stock this). The chick starter often has extra bits added into it to give them the best start. I also highly recommend a feeder that wont allow your chicks to poop and scratch (natural instinct) otherwise you’ll waste a lot of food or end up with sick chicks. 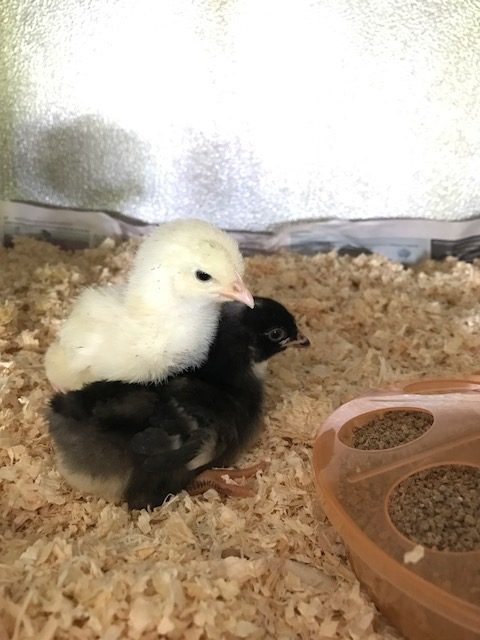 Fresh clean water, always. Again this is to stop diseases, but who wants to drink pooey water! You can get specialised water dishes to stop them from drowning in it, and I did find that I had to replace this a couple of times a day due to the stray poo floating in there. When they were a bit bigger, they would go through this pretty quickly so I swapped to a takeaway container.

Caring for your day old chicks

There isn’t much you need to do other than keep your chicks warm, keep the brood box clean, with fresh food and clean water. They do get stinky.

At around 4 weeks old your chicks are old enough to start getting some outside time, and when they have lost all their fluff (around 8-12 weeks) they can live outside (depending on your climate).

You will need to introduce your chicks to existing chickens with caution. We setup a small house for our second lot of chicks away from the bigger chickens to avoid any fights and they got used to each other slowly.

It will probably be a long time before we grow day old chicks again, not sure I can handle the stink again (but to be fair I was pregnant so that might have made things a lot worse) but I am glad we went through the process of raising from day old, even if they are psycho chickens!