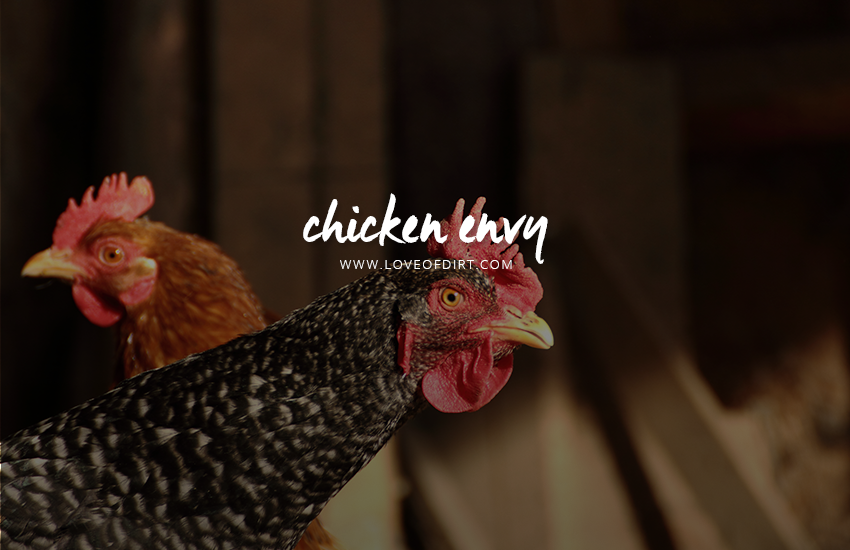 Our house sits on the side of a hill, which basically gives use a pretty ‘nice’ view into our surrounding neighbours backyards. Particularly around this time of year as the big Jacaranda tree that sits on the boundary of our garden (that normally provides a great deal of privacy) has lost it’s leaves.

I’ve always heard the distinct cluck of the chicken post egg laying call (bok bok bok bekerk), and often wondered where the Chickens lived. I got my first glimpse of them the other day and it turns out they are closer than I thought and live directly behind us. They were just chilling under their kids trampoline! Extreme chicken envy hit me.

For a while now I have been hassling Nathan about my desire for Chickens, I told him they would make a great Wedding Gift. Initially he was of the opinion that he didn’t think we should get them until we bought our own place and weren’t renting anymore. I sort of agreed with him, I didn’t really want to have to move the chickens. Unfortunately, we both have travel addictions, which means any time we get a spare amount of cash that could potentially be put towards a house deposit, it gets spent pretty quickly on a holiday. So my dreams of owning chickens just keeps moving further out of reach.

It turns out enough banging on about the fact that I want chickens is enough to eventually break Nathan. My constant pestering has made him finally agree. YAY! BUT I have to get permission from the real estate agent.

We are pretty lucky to have good landlords. They let us have our ‘indoor animals’ indoors, which from my experience is very uncommon in Australia. However, Chickens might be another story (no they wouldn’t be indoor chickens). I have been putting off the Chicken request, simply because I am afraid of a big fat NO, also because I don’t want the prospect of my future chickens to distract me from all the wedding planning I have to do (it will be like freaking christmas picking up my chick chicks).

Perhaps Nathan is anticipating a no, I am not sure he’ll be ready for my extreme disappointment especially because I’ve been googling the different breeds that I am considering, pinning super cool chicken coops, and just generally feeding my excitement.

This could end in disaster.

UPDATE: We have been rejected by the landlords because Chickens cause too much mess. No more than the bush turkeys I would suspect.

Do you have chickens and rent in the city? I’d love to know tips on how to convince the real estate agents!