Apologies in advance if you come across some major typos here, I am writing this from my iPad. And I am a bit of a gumby with the keys.

So we flew from the Gold Coast via budget airline – Air Asia. We got an extremely cheap deal so we didn’t expect it to be great, but i will say the seats we’re reminiscent of a 1980s school bus. We had a stopover in Malaysia for 2 hours, there isn’t much to do there, but they do have free wifi. They were talking about their new terminal, which we may get to see on the way home. We had to walk about a km on the tarmac from the terminal to board the plane, walking past the baggage handlers we started to worry whether our luggage would arrive, bags strewn everywhere. Just a reminder never to put valuable items in checked luggage.

On arrival we got a really friendly taxi driver to take us to where we were staying, he was young and talked about luxury cars (he wanted a BMW) and the wedding he had been to the night before (300 guests!!).

Phnom Penh wasn’t as chaotic as I was expecting, way more cars than scooters, and of course we arrived in the midst of morning peak hour.

After freshening up and feeding outer faces at a ‘international’ style food place we decided to knock over a few things to see.

We picked up a Tuk-Tuk driver to take us to the killing fields. tuk-tuks are little motorcycles with carriages attached to the back. It’s only about 7km from the city centre but it’s a bumpy, interesting and fun ride. As We wove through the back streets, it’s really eye opening to see the extreme poverty, yet the people still smile. Rickety houses on stilts surrounded by garbage.

The killing fields isn’t a fun place at all. I took a few photos but really didn’t feel good about taking photos of the graves of 1,000s of people, who died in horrific circumstances.
So instead here is a killing fields chicken (there are lots of stray chickens in Cambodia). 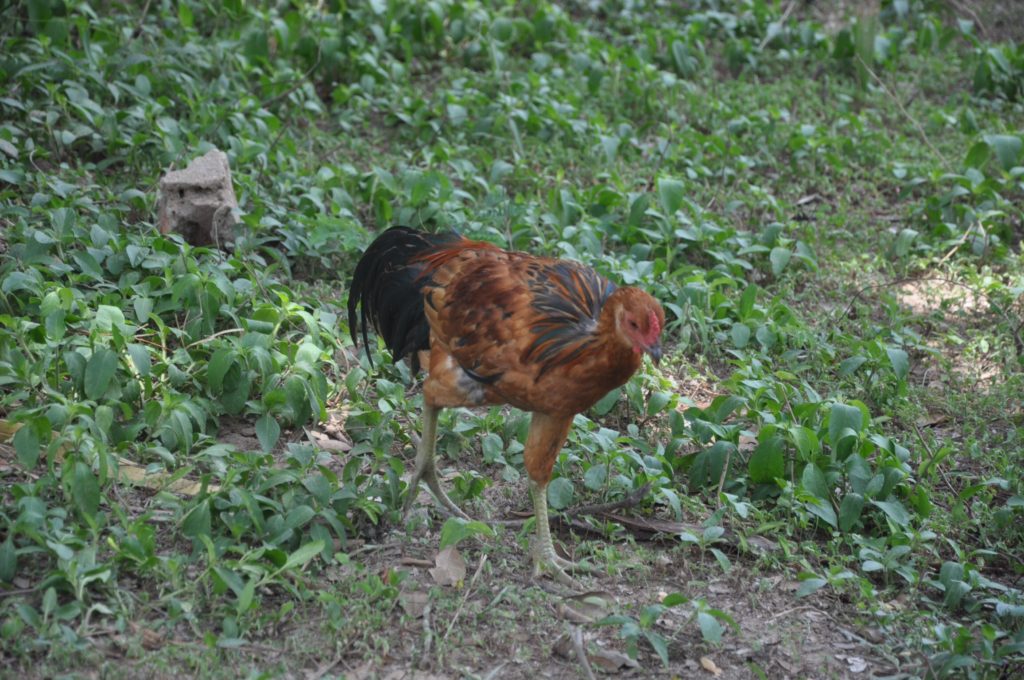 I won’t go too much into the history of this, but basically anyone who was seen as a threat to the regime was sent to be executed. Mostly educated city dwellers.

Aside from the mass graves, the most confronting part was a tree that was used to kill the babies and small children. It sat right next to the put that contained bodies of children and was apparently used as the weapon of choice.

It took us about 2 hours to do the walking tour and we were back in the city by 1pm.

This place reminds me of the Victoria Markets in Melbourne, except more packed in, hotter and claustrophobic. We walked through for about half an hour, clothes, souvenirs, silk. Lots of bargains to be had but we were feeling a little jet lagged so couldn’t handle it for too long. We might venture back in here on our last day.

We then decided we would go check out the silver pagoda inside the Royal Palace. The Tuk-tuk driver dropped us at what we thought was the Royal Palace but was in fact the national museum. Too late we’d already paid our entry but it was still interesting nonetheless. Plus it had a pretty garden. We did find the Royal Palace (it was a bit hard to miss) but by that point we were too tired so ventured home.